DJ Jazzy Jeff and the Fresh Prince, Steady B, Three Times Dope. Nearly every player who made Philadelphia into hip-hop’s second city in the ’80s came to light through producer Lawrence Goodman’s Pop Art label. Its most monumental releases, though, came from New York. Before Marley Marl was cold chillin’, his crew got their juice from Pop Art. The reverse was also true: For two short years, beginning with Roxanne Shanté’s “Roxanne’s Revenge” in 1984, hip-hop’s first supergroup turned Goodman’s R&B label into ground zero for New York battle rap. The Juice Crew’s eventual departure would lead Goodman and his brother, Dana, to seek and refine Philly’s own emerging rap talents.

“The music scene in Philly was pretty small, and Lawrence and Dana were the only major players in the city,” says Troy Carter, a rapper with Philly group 2 Too Many in the early ’90s. Carter recently acquired the Pop Art catalog through his company, Coalition Media Group. “If you wanted to get into hip-hop, you had to go through the Goodman brothers.”

Pop Art began, inauspiciously, with a string of early ’80s boogie releases by singer Ron Aikens—whom Goodman met while serving time in Pennsylvania’s Graterford Prison in the ’70s—and his group, Galaxxy. “Pop Art was short for Popular Artists, which was the management company,” Goodman explains. “A lawyer gave us that name. He asked what kind of music we wanted to do, and we said, ‘Pop R&B.’ People didn’t like the name, because it didn’t fit with the music. But the label created its own strength to make people accept it.” After Galaxxy, Goodman cut singles for Major Harris (of Delfonics fame), Instant Funk, and Jerry Butler collaborator Mikki Farrow.

But the record that put Pop Art on the map was a bare-bones 1984 track by the enigmatic Eddie D called “Cold Cash $ Money.”

“That was the first rap record I made, and it was a local hit,” Goodman says of Eddie D’s Galaxxy-backed single. “I knew nothing about rap, [but] I learned some techniques from him and incorporated what little I knew about R&B. When that took off, I just left R&B alone.”

Dana Goodman, brought on by his brother to handle promotions for Pop Art, struck up a relationship with Marley Marl and Mr. Magic after securing airplay for “Cold Cash $ Money” on New York’s WBLS. “Magic and Marley told me [about] Roxanne Shanté answering UTFO’s [‘Roxanne Roxanne’],” Lawrence recalls. “They said they was getting all this positive feedback playing [‘Roxanne’s Revenge’] on the radio as a tape, but no label would pick it up [because of its content]. I called some stores to find out if they knew about it, and it was just like they said.”

Initial pressings of the “Roxanne’s Revenge” 12-inch featured the cassette recording made in Marley’s Queensbridge apartment, which the DJ had been playing on the radio. A lawsuit from UTFO’s label, Select Records, necessitated the recording of the less visceral studio version found on later pressings. The unprecedented wave of response records—known collectively as “the Roxanne Wars”— flowed like a wellspring. “[It was] just like Jerry Springer,” Goodman says. “The first time somebody fought on TV, it caught everybody’s attention. That’s the same shock she had with that record. It made people want to get involved with the music more, because it was something they was thinking but never would say.”

After “Roxanne’s Revenge,” Goodman gained access to the pool of artists coming up under Marley Marl in Queens, including MC Shan and Craig G, while recording additional Shanté tracks like “Bite This” and “The Def Fresh Crew” (featuring the recorded debut of Biz Markie). Ruffhouse Records founder and engineer Joe “the Butcher” Nicolo, whose Studio 4 was the site of nearly every Philly rap record of note, beginning with Schoolly D’s “P.S.K.,” recalls Shanté’s sessions. “Once [Roxanne] rapped to a beat once, she was done. That was the performance, and you went on to a different song. I remember once she wouldn’t rap until we bought her strawberries.”

MC Shan’s “Beat Biter” b/w “The Bridge” (the lone release on Bridge Records, a joint venture between Cold Chillin’ cofounder Tyrone Williams and Pop Art) had a similar effect. While the A-side directly attacked LL Cool J, it was, ironically, the seemingly innocuous B-side that spurred hip-hop’s second major war on wax (after KRS-One took Shan’s Queens Borough pride as a slight against the Bronx). Salt-N-Pepa—then known as Super Nature—would also debut on Pop Art, with an answer to Doug E. Fresh and the Get Fresh Crew’s “The Show” called “The Show Stoppa.”

“You had all these branches of rap starting to go in different directions, and everybody had to find out what branch they was gonna get into to be successful,” Goodman says of his decision to pass on additional records by the duo. “We was basically on the hardcore vibe. Salt-N-Pepa was like bubblegum high-school rap. We didn’t think too much of that.”

With his New York talent defecting to Cold Chillin’, Goodman—who had begun producing rap tracks under the name L.G. the Teacher—turned his attention in ’86 to nephew Warren “MC Boob” McGlone, aka Steady B. “At that time, we was just making people into rappers,” Goodman says. “If you wanted to be a rapper, this was your chance—we’d manufacture everything. All you had to do was put the shoe on and wear it well.” Goodman says he encouraged Steady, then a fifteen-year-old high school kid with an LL Cool J-like flow, to attack the better-known rapper on his Marley Marl–produced debut, “Take Your Radio.”

“Steady was a fan of LL’s, and ‘I Can’t Live Without My Radio’ was LL’s biggest record at the time,” Goodman says. “Most of the time, these guys dissing rappers [are] fans of them. They just want their fame. And the best way to do that is to talk bad about ’em. [Rap beefs] were techniques to sell records. That’s all it was.”

By the mid-1980s, Philadelphia was known for its highly competitive DJ talent—most notably Jazzy Jeff, Cash Money, Tat Money, and Spinbad—and the transformer scratch, a robotic stuttering sound created through rhythmic ticks of the crossfader. Oddly, the comparably obscure Grand Dragon K.D. gave the technique its vinyl premiere, on Steady B’s “Bring the Beat Back.”

“He was in the right place at the right time,” says DJ Tat Money, who eventually replaced K.D. as Steady B’s DJ. “Spinbad was actually the first one that did it [live], but he didn’t call it ‘transformer.’ Cash [Money] took it to another level and called it ‘transformer.’ Jeff did more parties, so he [became] better known for it.”

Jazzy Jeff would also prove prescient when he partnered with Will Smith, whose rhyme style and disposition was mocked and shunned by other local DJs. “I thought he was corny,” Goodman admits of his first encounter with the Fresh Prince. “It just sounded silly to me.” Goodman’s brother, Dana, however, liked Smith’s hustle, and made the duo the centerpiece of his newly formed label, Word-Up. “Dana wanted to start his own label because we had some differences,” Lawrence Goodman says. “I produced [‘Girls of the World’] and let him keep it.” After its initial release on Word-Up, Jive Records, which had just signed Steady B to a five-album deal, picked up the duo’s 1987 debut, Rock the House.

“At that time, the independents were being outmaneuvered,” Lawrence Goodman continues. “So we started putting the albums out on major labels to have [wider] distribution. They’d use me to find the acts, then give me production deals.”

With Pop Art on hiatus, Goodman and Steady B formed a new subsidiary label, Hilltop Hustlers, around the newly assembled crew of Steady, Cool C, and Three Times Dope. “The Hilltop Hustlers were a real gang,” Tat Money says, referring to a crew that claimed the corner of Sixtieth Street and Lansdowne Avenue near Steady B’s house in West Philadelphia. “We weren’t a part of that, but Steady took the name and ran with it.” The inclusion of Three Times Dope—particularly the Gumby-sporting rapper E.S.T., aka “the Acknickulous One,” with his inventive slang—complemented Steady B and Cool C’s harder-edged style and gave Philly its own answer to the Juice Crew. “Philly is really separate,” explains Tat Money. “Three Times Dope, being from North Philly, and us, being from West Philly, was a monumental moment, because that just wasn’t done. You brought the two areas of the town together—it was, like, incredible.”

Not everyone agreed. “I don’t know why, but the hate was thick—[people] used to hate on Steady B and Cool C,” recalls Steady’s cousin, Quran Goodman of Da Youngsta’s. “Steady was the shit, though. People don’t know, but he was a crazy-hot producer—he was sick with the beats.”

One possible reason for that ignorance was that L.G.’s contracts with artists often gave him sole producer’s credit, even when he acted only as the executive producer and did not assemble any beats. While this was not uncommon practice at the time, it was a sticking point for Three Times Dope (whose lineup included in-house producer Chuck Nice), and the group left the Hilltop camp in ’88.

Da Youngsta’s, a trio consisting of Lawrence’s sons, Quran and Taji, and their cousin, Tarik Dawson, were Lawrence’s final project. Debuting in 1992—the same year as Kris Kross—Da Youngsta’s offered a harder variation on kiddie rap, backed by knocking East Coast beats from the likes of DJ Premier, Pete Rock, and Marley Marl. The Pop Art name, meanwhile, was revived for their nal album, 1995’s I’ll Make U Famous. “That was the end of me giving it my best shot in terms of music,” says Lawrence Goodman, who now works as a foreman for Philadelphia’s water department. “I’m older; I knew when it was time to move over.”

Things wouldn’t go as smoothly for Steady B and Cool C.

On January 2, 1996, three years after they released Countin’ Endless Bank as C.E.B. (with DJ Ultimate Eaze), the pair and a third man were arrested for killing female police officer Lauretha Vaird during a botched bank robbery. Cool C, fingered as the shooter, remains on death row following a 2006 stay of execution. Steady, the getaway driver, is serving life. Their story stands as one of the rap industry’s darkest cautionary tales. “They tried to live that life they talked about in their music,” Goodman says. “Unfortunately, it caught up with them.”

With a book, documentary film, and the Coalition’s re-issues all currently in the works, some positive light may finally shine on a label whose accomplishments have been long overshadowed by drama. “Lawrence and Dana had a reputation as street guys,” Troy Carter says. “When you heard a story about the Goodman brothers, it always involved some sort of scandal. But as Russell [Simmons] was building Def Jam, they were building the careers of Salt-N- Pepa, Jazzy Jeff and the Fresh Prince, MC Shan. Real acts would come down from New York to Philadelphia to get record deals.” 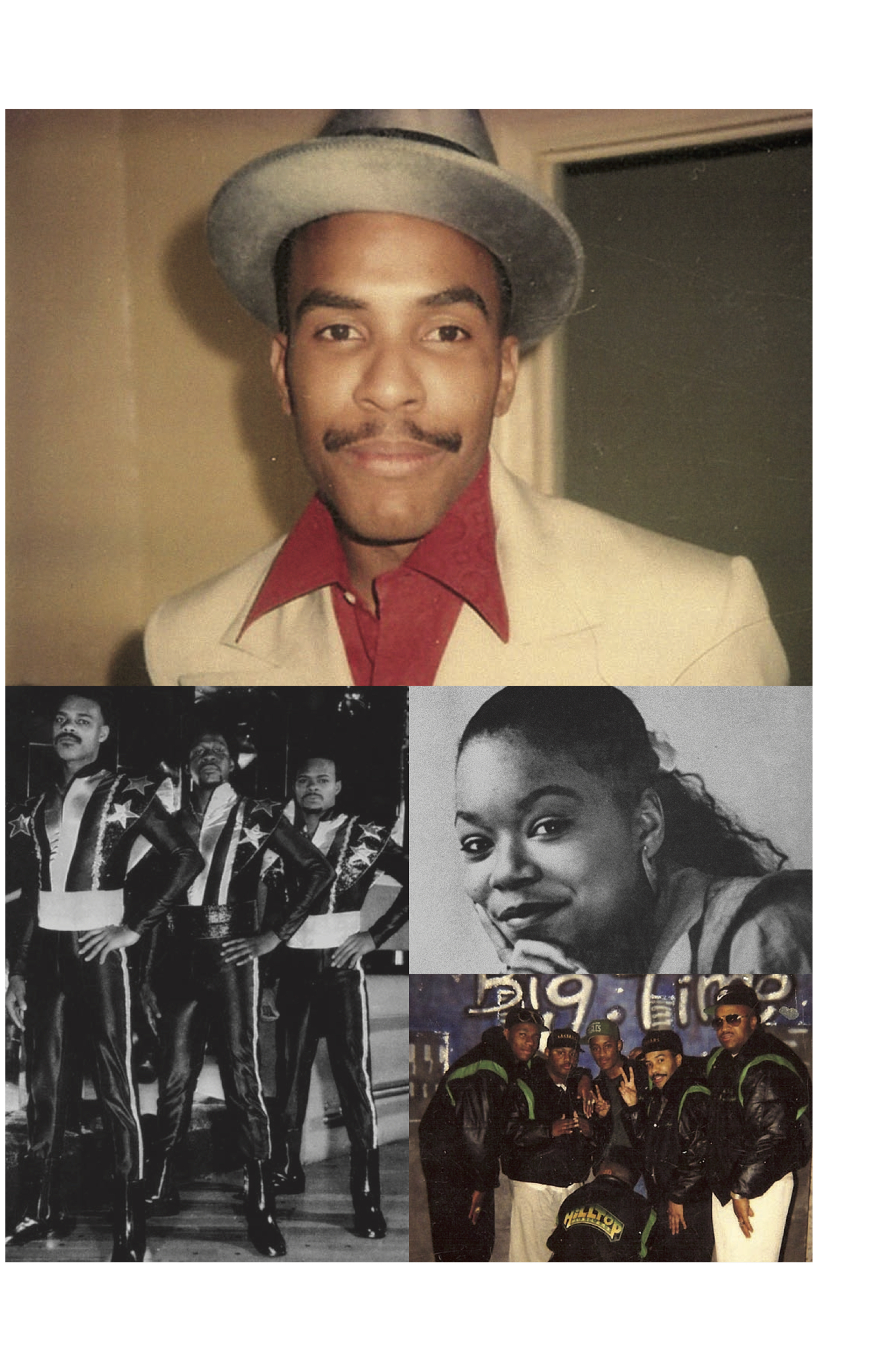