It’s hard to imagine any movement slipping through the cracks in New York, yet the story of reggae/dancehall here remains largely undocumented. Colored with artists like Sister Carol, Shinehead, Scion Sashay Success, Sammy Levi and, yes, Shaggy; labels like Wackies, Jah Life, Wittys and Mr. Doo; and soundsystems like Downbeat, King Addies and LP International, it’s a legacy somewhat blurred by the dual citizenship of many of its practitioners.

One local instiution whose clout cannot be denied, however, is Philip Smart’s HC&F Studio, arguably the most significant and longest-running reggae studio in the US. Located just outside of New York City in Freeport, Long Island — the home of Flavor Flav — HC&F was founded in 1982 as an extension of a local trucking business run by relatives of Smart’s (their first initials were H, C and F). The studio was built with the help of the band Monyaka, who would score an unlikely hit with the funky, R&B-flavored “Go Deh Yaka,” the first song ever recorded at the studio.

Brooklyn-based producers like Jah Life and Whitfield “Witty’ Henry would come to rely on HC&F, with major Jamaican stars like Horace Andy, Tenor Saw and Cocoa Tea following local artists into the vocal booth. Barrington Levy’s “Murderer” was recorded here, as was the late Garnett Silk’s haunting “Retreat Wicked Man,” along with nearly every single that broke dancehall into American radio in the early 1990s: Shabba Ranks’ “Mr. Loverman,” Supercat’s “Don Dada” and Shaggy’s “Oh Carolina” and “Boombastic,” to name a few.

But the story of HC&F begins in Kingston, where Smart grew up with Augustus Pablo in middle-class Havendale. After collaborating on the writing of Jacob Miller’s “Baby, I Love You So,” he followed Pablo to King Tubby’s, where he would witness the sessions that would ultimately comprise the legendary King Tubby’s Meets Rockers Uptown. “I’d be there every night after school, watching,” Smart recalls from HC&F’s wood-paneled Studio A. “Until one day Tubby get up and say ‘Gwaan and take the vocals up.”‘

Taking the name Prince Philip, Smart soon found himself mixing tracks like johnny Clarke’s “None Shall Escape The Judgment.” “Producers felt comfortable working with me so Tubbs could go on to the other business like building amplifiers. Eventually, Tubbs respect and trust me enough he gave me my own keys — he never trust nobody like that before, not even (Prince) Jammy.”

A thirst for new techniques led Smart to New York, where he took a course in audio engineering at Electric Lady Studios. “They wasn’t really teaching me much I didn’t already know but the experience of being in New York led me to bring back some new ideas to Jamaica. This was the time when we brought in the sound effects — thunder, chains and gates closing, the oscillator tunes.”

Relocating to New York for good in 1976 to attend the now-defunct School of Broadcasting and Announcing (he would go on to host WNYU radio’s Get Smart program for nearly 20 years), steady work from Brad’s Records in the Bronx convinced Smart of a need for a 24-hour reggae studio in New York. Ultimately, HC&F would find its niche at the dawn of the post-Sleng Teng computer production era.

“We built drum patterns for a lot of the sessions then so producers start to come here for that,” Smart recalls. “Nobody was worrying about production credits. We were more interested in developing a sound. At that time it was all about one love and unity. We just wanted to hear some reggae played on WBLS.”

The fruits of this period can be heard on 5 Borough Fire, a recently issued compilation on HC&F’s new in-house reissues label, Street Platinum & Gold, which features Smart’s sparse, bass-heavy productions for Scion Success and Nicodemus, among others.

Today the studio remains as relevant as ever: Hard Drive, Headache and All Out are among the riddims it has issued recenly through VP and Greensleeves Records. Elephant Man, Vybz Kartel, TOK and Wayne Wonder, who recorded the bulk of his album No Holding Back here, are all familiar faces.

Like Tubby before him, Smart continues to mentor younger engineers and producers-alumni who continue to use the studio include Sting International, Chris Goldfinga and Eric “Big Jeans” Delisser. He’s also adapted with the times, creating distinctive takes on today’s manic dancehall riddims like the synth-heavy Project X, issued last year through VP.

“Dancehall represents originality to me in terms of music production, maybe because I have done so many decades of drum and bass,” Smart says. “But I think the original era of reggae needed to be represented.” 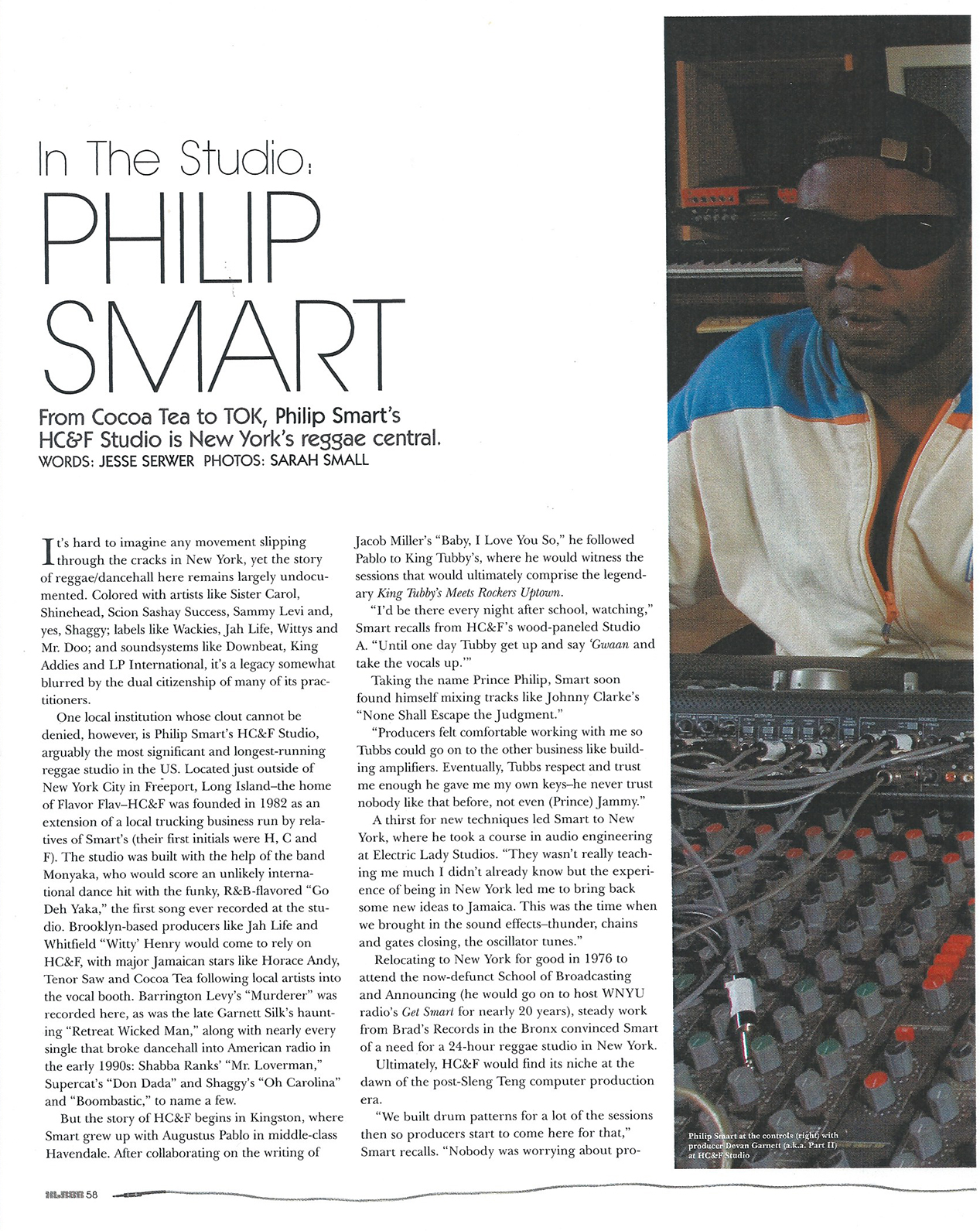